If you aren’t already aware, Jack Ma launched the world’s first Digital Free Trade Zone (DFTZ) together with Malaysia’s Prime Minister at the groundbreaking ceremony on 3 November. SITEC was fortunate enough to receive an invite by Pos Malaysia to tour the e-Fulfillment hub, KACT1, in early October, prior to its official launch in November.

The visit offered a tantalising glimpse into the advancements and improvements planned to better serve the e-Commerce motto of speed, speed, and more speed.

Phase One of the renovation was completed in mid-August, with Phase Two to be completed by December. We learnt that Pos Malaysia has thus far spent RM30 million to convert the LCCT terminal from a passenger terminal to a cargo terminal/warehouse.

“We are developing this e-Fulfilment Hub to facilitate e-Commerce, and we sent out our first shipment to China this morning, with the clearance for that shipment taking less than 20 minutes,” said Vijindran.

The significance of the shipment clearing in less than 20 minutes comes from the way the Digital Free Trade Zone (DFTZ) facilitates e-Commerce, namely, in how it shortened the process.

“But, as e-Commerce is about speed, not only in buying but also in receiving the goods, the time has now been cut to take a maximum of three hours, as declaration of goods, Customs, just about everything we can digitalise has been done.

“This was only possible through the cooperation and handshaking with all the parties involved,” he added.

A question was brought up regarding perishable goods, for which Vijindran replied that Phase One will not be handling perishables due to two major concerns.

The first is the matter of permits, which require longer procedures for the goods, and tours by the relevant authorities to ensure the facility can handle perishables, which all take a lot more time.

The second concern here revolves around demand, which remains limited for perishables. As perishables are Fast-Moving Consumer Goods (FMCG), the idea is not to store them, but to move them through cargo in, cargo out.

However, Phase Three, which will see renovations begin in 2018, will have a cooler port, according to Vijindran.

The hub will be focusing on seven processes in total. These fulfilment processes cover just about every scenario that an e-Commerce merchant might meet, from an overseas merchant to a Malaysian buyer, or vice versa.

Foreign sellers and Malaysian merchants can both send their goods to the hub for warehousing, where the hub also provides fulfilment by picking, packing, checking, and sending goods along for last mile delivery. The fulfilment is not just for products to buyers in Malaysia, but to other countries as well.

According to Vijindran, an ideal scenario would have a buyer in Bangkok completing a purchase transaction at 8.35 am and be able to receive the item by late afternoon on the same day. The last process will be trans-shipping – essentially, standard logistics.

He clarified that duties are still applicable for items coming from the warehouse. Any clause that Customs says is taxable applies as well. However, Pos Malaysia is in talks with the various players as well as the government to see if anything can be done to further facilitate e-Commerce in terms of tax incentives.

As of the time of this article, no promises have been made yet, though.

With a total of about 477,000 square feet to work with, some space has also been dedicated to becoming a lab for robots in the facility. These Automated Guided Vehicles, or AGVs, will have 5,000 square feet of the warehouse dedicated to testing the feasibility of having more of the AGVs involved in the hub. By carrying the shelves to picker stations, these AGVs will serve as ‘picker enhancements’, and are projected to cut picking time by between 50% to 70%.

“As of now, we will be deploying 10 robots as a pilot phase, and comparing them to manual picking in Phase One,” noted Vijindran. While the robots are able to navigate via means such as infrared rangefinders and localised GPS waypoints, the AGVs at the hub will utilise a series of laid-out magnetic waypoints within the test area to serve as collision avoidance and item selection guides.

Amazon and Lazada also utilise similar systems, where their AGVs can run for up to eight hours on a 40 minute charge. The AGVs will also automatically move to a charging station on their own, and can carry a maximum load of 500kg.

These AGVs are from the Quicktron brand, and the entire contract for 10 robots, server assistance, maintenance, and peripherals comes up to a whopping US$500,000 bill for Pos Malaysia, which each robot alone costing US$10,000.

When it came to the question of security, as raised by one of the attendees, Vijindran assured that security was as airtight as humanely possible. With 244 cameras operating and security guards on shifts 24 hours a day, seven days a week, the warehouse is also a worker-only zone. Workers are also prohibited from wearing anything with pockets or collars, and are required to leave bags and other belongings at designated lockers before entering the zone.

In terms of smuggling deterrence while working within a time constraint, the hub utilises the PAM (pre-alert manifest) system, where sellers declare their items before they arrive. This allows for processes to be completed and ready for the item the moment it arrives, expediting the processing of the goods.

A testament to this airtight security is the strict implementation of a no-camera policy, where visitors such as us were not allowed to take or distribute pictures of the main facility interiors, with photos limited to only the external portions of the facility. 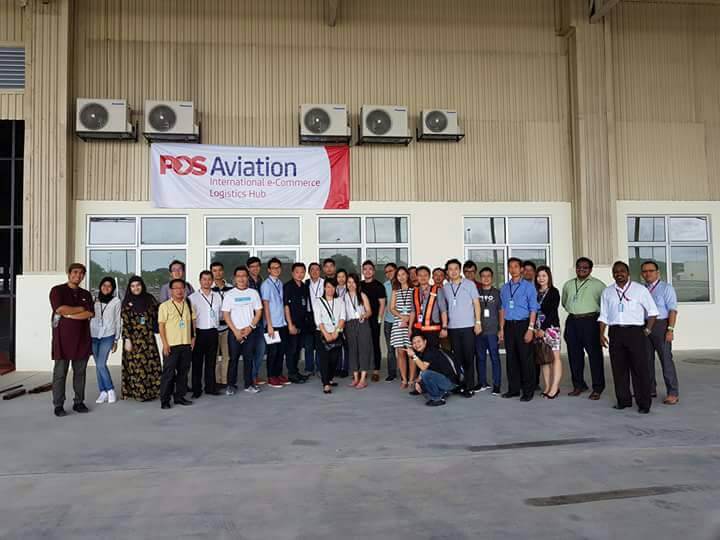 From what can be seen of the processes involved at the hub, both in connection to the DFTZ as well as in the digitalisation of the import/export process, the Pos Malaysia e-Fulfilment Hub stands to be a great boon to the local e-Commerce ecosystem.

Not only is this a sign of progress towards future commerce, but the means involved also place the hub as a symbol of just how smart solutions can further improve existing services and improve the quality of life of citizens.

This writer, for one, cannot wait for the official launch of the hub in November 2017, and is expectantly looking forward to a smoother online shopping experience in the future.