Goh began the session by introducing the concept of internet media. He opened with the topic of social media marketing by explaining the characteristics of “Paid media”, “We Media” and “Earned Media”. 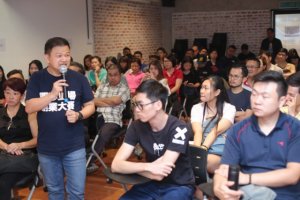 Goh shared the advantages of internet advertising from different perspectives including low costs, measurable results, advertisement varieties, such as precise, wide range and most importantly, speed of spreading the advertisement.

In internet era, advertisement is a powerful marketing model. Goh Boon Peng also shared the basic concepts of Web advertising for the benefits of those who are currently exploring Internet advertising.

CPM (Cost per mille/Impressions): cost per thousand impressions. Advertising article, every 1000 (impressions) of costs is one of the most commonly used for online advertising.

“Compare with the cheapest CPM to the expensive CPO, the CPO can be closed up to 25% of orders its highest then CPM and own media costs were relatively low”

What we are familiar with is that Key opinion leaders (KOL) nowadays make up the concept of We Media. Due to the popularization of Internet 2.0, everyone had the opportunity to voice out and websites allowed users to provide their own content.

Some of the types of Earned Media included KOL (Key opinion leaders), vlog, blog, Facebook, content and e-paper. One such case is the “fans economy” of Chinese e-tailer Xiao Mi, who entered the Chinese phone market with their affordable range of low to higher end mobile phones.

According to Goh, Growth Hacking is predicted to see increased demand within 10 years, as growth hackers are efficient at using low-cost methods fuelled by creative thinking and analysis to achieve high volume revenue and traffic within a shorter period of time.

Goh ended the session by sharing about the AARRR model (Acquisition, Activation, Retention, Revenue, and Referral), which corresponds to to 5 phases of the user lifecycle.