Shah Alam, October 21— Malaysia Top E-Commerce Merchant Awards (TOPECM), the largest event of its kind in Malaysia, has received a record number of entries for its fifth consecutive competition.

Organised by Selangor Information Technology and E-commerce Council (SITEC), the awards received 162 applications, an increase of 27% compared to 128 applicants from the previous year.

Since the first awards competition in 2016, TOPECM typically received between 100-125 participants. The numbers for the 2020 submission, which the award accepted from 15 September 2020 through 18 October 2020, surpass all previous records.

True to its motto of rewarding the most creative and innovative homegrown E-Commerce Merchants, the participating E-Merchants must meet the minimum threshold of RM25,000 of sales or 100 orders per month.

The increase of the participants reflects the booming E-Commerce sector, especially after the movement control order (MCO), was imposed in March as well as the recent reimposition of CMCO in Sabah and Klang Valley, where the business community has to embrace digitalisation to cope with office closures, restricted movement and supply interruption.

Selangor status as the hub for E-Commerce in the country was proven again when 60% of the participating E merchants belong, followed by E merchants from Kuala Lumpur and Johor with 15% respectively.

Among the Malaysian E-merchants, fashion is the most popular selling products with 25%, followed by mobile, electronic & gadgets with 20%, Health & Beauties 15%, Home and Living 10%, Grocery 8%. The rest of 12% including Sports, Mum & Baby, Automotive and Ticketing. 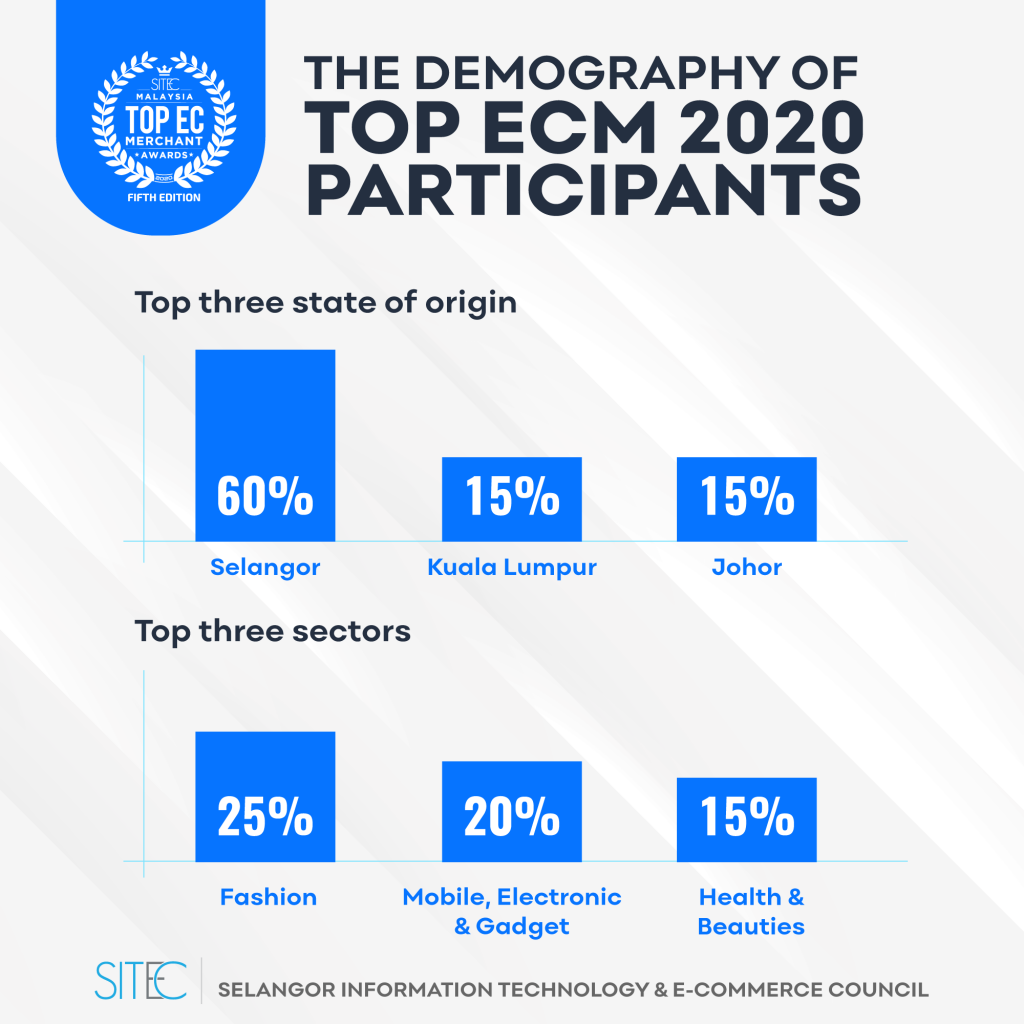 The sudden increase of Grocery items E sellers from 2% the previous year, reflect how the Covid-19 Pandemic has shaped our lives to embrace a low-touch economy.

The judging criteria are split into two major categories. 50% will be decided based on products, platforms, visibility & promotion and business potential. Another 50% is based on the sales and orders from Online Sales Contest starting from 3rd November to 16th November.

The online sales contest is held in conjunction with the 11.11 Single Day Mega Sales so that the E merchants can take advantage of the campaign period to increase their sales.

The judging panel is selected from the key players within the digital economy including :

Past winners of the Top E-Commerce Merchant Awards including Sally Fashion, Printcious, Sea Gamer Mall and Hermo.
The award ceremony will be held on 3rd December 2020.