Firdaus Noordin (left), with a participant

Firdaus Noordin, head of merchant acquisition at Takatack Technologies pointed out that times have changed, and that it was important that merchants take control of the message they send in the digital space.

He also offered several tips to the attendees in terms of going online, reminding them that the first impression matters, and that the photo speaks more than any description. He then spoke about Tackthis!, a product of his company that allows an easy method for merchants to handle their store.

It features a centralised inventory system, as well as allowing the merchant to create one web-store and place it across social media.

“It’s kind of like placing your own franchise on each social media, so it helps your own brand,” said Firdaus.

The next speaker to step to the podium was Nicky Pang Yung Kong, senior business development executive of Asiapay. Pang spoke about the options available to merchants offered by Asiapay as a payment gateway, such as the ability to schedule payments, make payments in batches, and paying by installments, among others.

He also spoke about the wide reach Asiapay has, as the gateway works with 100 banks across 16 countries, while boasting a multilingual interface that also caters to mobile payment options. Asiapay also offers multi-channel support, and provides analysis and reports on SKU performance as well.

The third speaker of the day was Shairazi Sulastry, the head of merchants of Zyllem. He spoke about how his company promised same-day delivery to their partners, and aims to remove the waiting time involved in delivering packages. 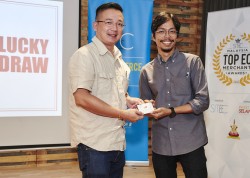 Shairazi also noted that the riders employed by the company are vetted and undergo training before being allowed to operate, and he also demonstrated the app and website for Zyllem.

The website, as he says, is for batch orders and is more for commercial use. The app, on the other hand, is meant more for convenience and single deliveries.