The Selangor Information Technology and E-Commerce Council (SITEC) held a class on mobile commerce on the 28th of February, providing attendees with the information they would need to make an informed decision on selling via mobile commerce platforms.

The class was led by Coach Adrian Oh, co-founder of eCommerceMILO, with guest speakers Edward Ling from Shopee and Becca Yap of Shoppr, to an audience of 95. 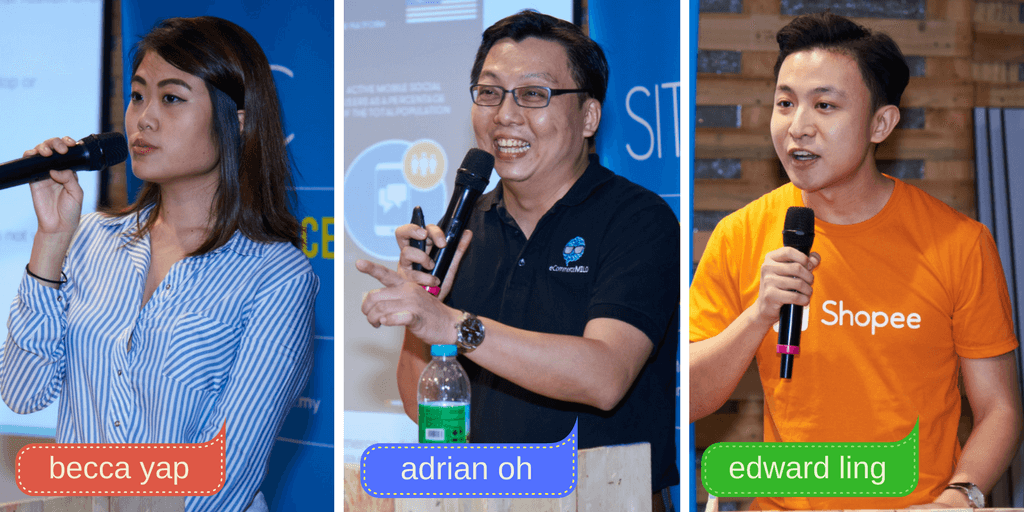 With over 43 million active mobile subscriptions in Malaysia, mobile browser usage has surpassed desktop browser usage in Malaysia since early 2016, signalling a prime opportunity. As such, the move towards Mobile is no longer an option now, but a necessity, for e-merchants, he further noted. 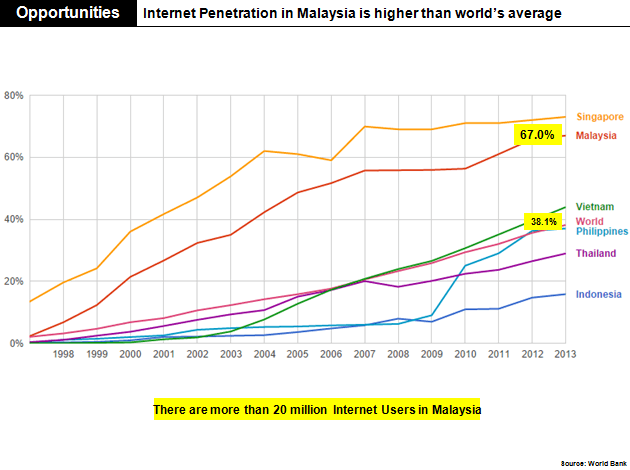 According to Oh, merchants can consider two choices when it comes to moving to mobile commerce. The first would be through a Mobile App, which would require the development or use of a mobile app unto itself. The second would be through Mobile Web, which requires making your website entirely mobile-friendly.

He advised merchants to balance the issues of cost, technology, distribution, and the type of business the choice is being made for. Costs may be immediate or long-term.Some of the costs may include app development and app maintenance, and manpower costs (people who maintain the app, be it yourself or a hire).

At the same time, this has to be weighed against the technology and distribution. He noted that the Apple Store has its own highly stringent checks, which have to be passed each time the app is updated or changed, quite unlike the Google Playstore (which has its own requirements and checks, though not quite as stringent).

One last point of balance is the type of business the choice is being made for. Oh advised to consider if the business deals in fast-moving consumer goods, or in items which are only bought once every few years. Oh advised the choice of developing an app is more suited to businesses dealing in FMCG items, such as groceries, as that would then lend convenience to the consumer. However, the cost and upkeep of the app would not stand up for slower moving, higher priced items such as kitchen appliances and air-conditioning units. 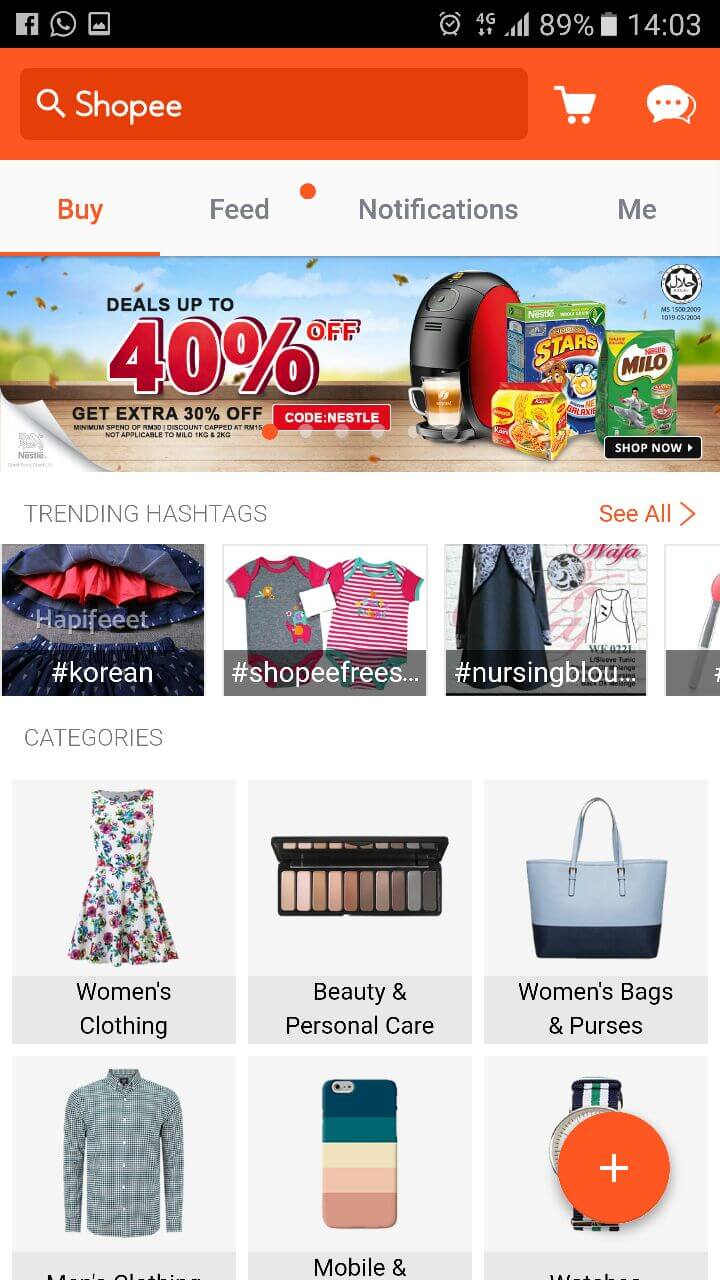 I think Mobile Web is a must-have. When you search for something on a phone browser, they prioritise mobile-friendly sites. You can try that out if you want, the results will be different from a desktop search engine. Mobile-friendliness is a must. If you have not experienced mobile commerce, start on it, give it a try, and think about how it can affect your business.

Oh, who revealed that he has tried most marketplace apps in Malaysia, advised attendees to take up Mobile Web anyway, pointing out that mobile marketing is able to reach a consumer base across multiple channels, and reminded merchants that consumer shopping behaviour is reshaped by the internet.

The first guest speaker was Edward Ling, a Business Development Category Manager with Shopee, a Garena subsidiary. Shoppee is a mobile-first, social-oriented marketplace with payment and logistical support for merchants.

“When people go on an app, they already have an idea of what they want, what they are looking for, so they use the search function. Then there are the browsers, who browse through a category. These make up 57% of shoppers in Shopee,” explained Ling.

He then shared four basic tenets of optimising m-Commerce with the class: 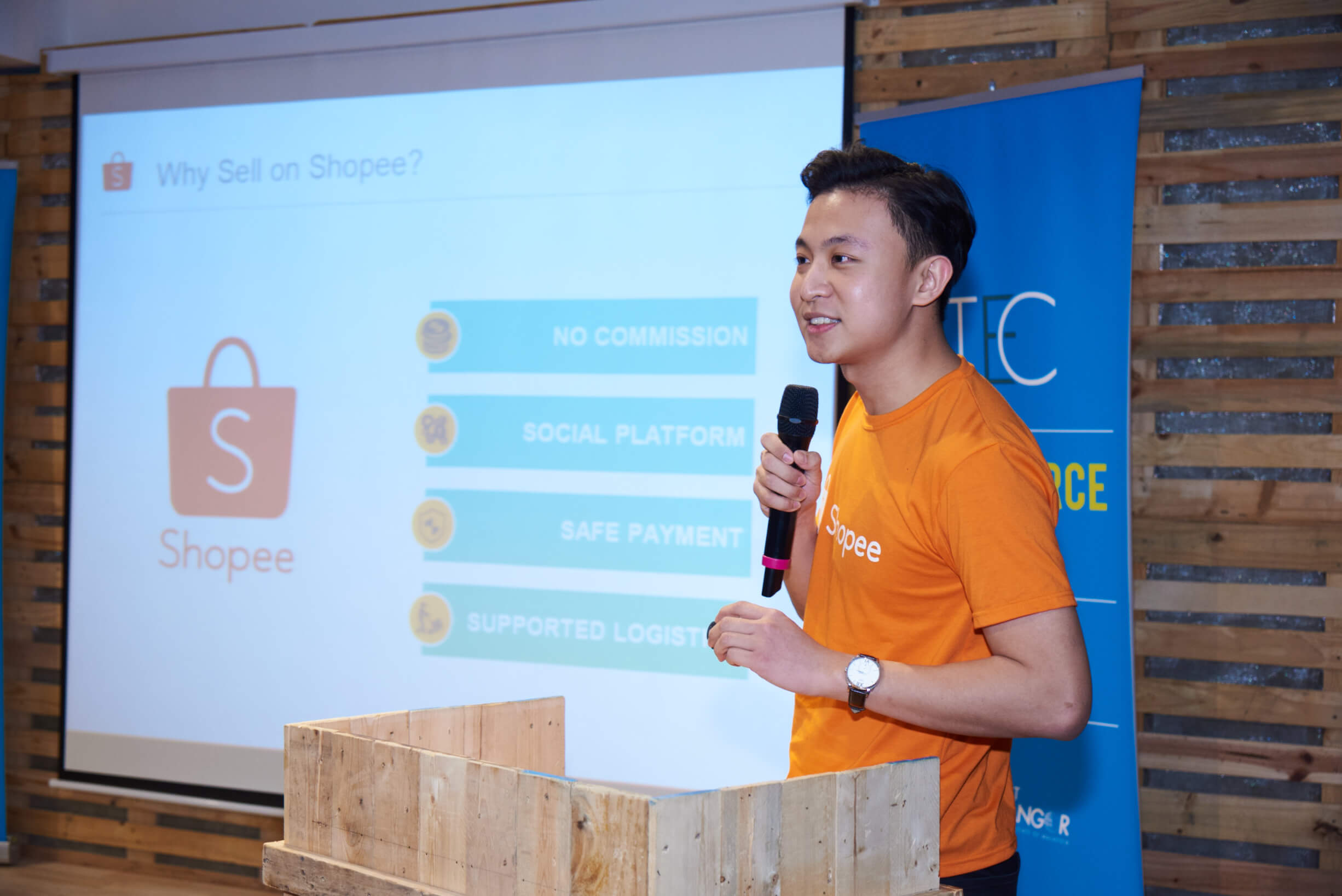 This action involves letting people know about the product or making it able for customers to search for or find the product.

This can be facilitated through actions such as ensuring the proper categorisation of products and using the right keywords in the product name or descriptions, depending on the common search terms used.

Additionally, merchants can utilise social media with proper hashtags, and making use of a platform’s own options, with examples being Shopee’s feed and newsletters.

The next step, Attract, is for when customers know of, or have found the product.

At this point, Ling suggests using informative taglines and clear and attractive photos.

This step aims to secure your potential customer’s interest and sale by using techniques to convince them that your product is superior to your competitors’.

There are several ways to do this, including offering free shipping, attractive discounts, or creating a sense of urgency, using terms such as ‘limited time only’ or ‘timed sale’ in the tagline.

Merchants will find that addressing common consumer concerns may help to increase their customers’ confidence in purchasing from them. Other means include making a mention of ready stock, along with the amount, and the days required to ship, together with other pertinent details such as clear descriptions. These are all additional details that help the consumer form a decision.

Maintaining quick and regular response times helps to convince the consumer as well, showing that the merchant is reliable and ready to respond to queries. Of course, the merchant has to pair this with good customer service.

This is where customer service, after-sales, and appreciation come in.

Merchants can update the buyer with their order status, say thank you for choosing the product, and exchange feedback/ratings.

In summary, Ling pointed out that a concise title with keywords, attractive photos, detailed product descriptions, important information like time and/or logistics, and relevant hashtags can help a merchant ride the m-Commerce wave.

Desktop Dominates? No, it’s Mobile, according to VISA

The second guest speaker was Becca Yap, Brand Manager and Head of Finance of Shoppr, who started her presentation with a video introducing Shoppr, which functions as a mobile fashion shopping assistant.

Becca addressed several misconceptions that people tend to have about mobile commerce.

The first was that a majority of users choose to shop via desktop.

According to Yap, the smartphone stands as the most often used device to access the internet in SEA, with about 50% of respondents from Indonesia, Singapore, Malaysia, and Thailand reporting they made purchases using smartphones (according to data from Visa in June 2015). 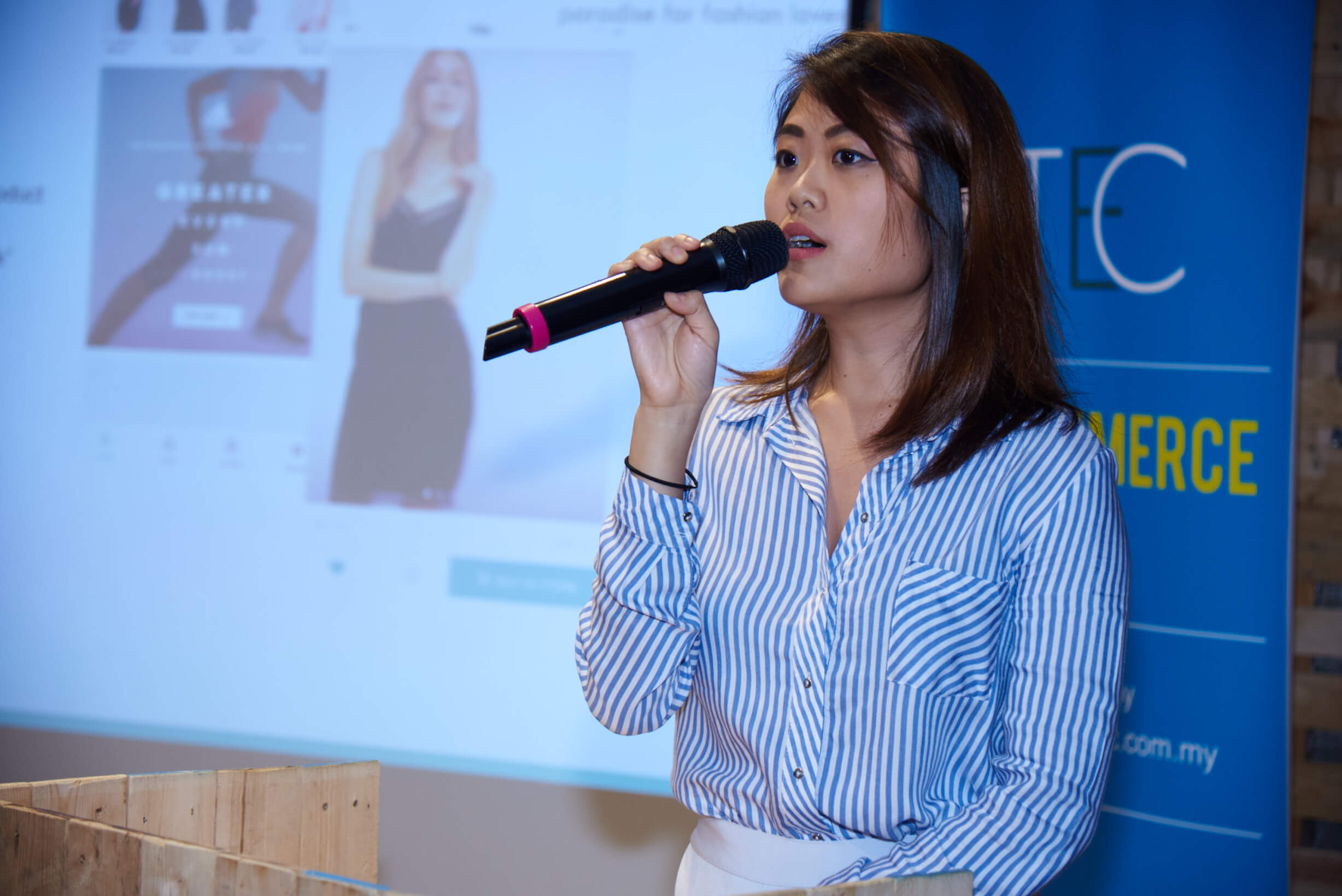 Yap advised that, to leverage on the dominance of the smartphone, merchants could consider utilising omnichannel marketing (marketing using various sales channels at the same time), as well as improve the mobile experience so that the UI is fully responsive and easy to use. Second-generation channels can also be incorporated, such as mobile browser pushes and targeted, personalised offers.

Mobiles also have the potential to catch impulse purchases, with Yap stating that people stuck in congestion, in her experience, tend to browse products on their phones and make purchases.

Age Not A Barrier for Mobile Consumerism

The second misconception was that m-Commerce only targets a specific age group, namely under-25s and millennials, as well as the belief that smartphone penetration is higher amongst youths and have a better understanding of mobile transactions.

Yap countered that, according to Kantar’s latest study, 52% of 25-34 year olds use mobile payments weekly, and this is the highest among other age groups. Popular chat apps like WeChat and Line have also paved the way for easier mobile transactions with services like WeChat Pay and Line Pay.

Yap also reminded attendees that the older age groups also have access to bank accounts and have more disposable income, while also finding m-Commerce more convenient due to time spent at work, with Shoppr being a case in point.

The third misconception is that only big brands and businesses have the capacity, capital, and capacity to take advantage of m-Commerce, due to the need to develop an app, and having a budget for mobile marketing and marketers who understand it.

Yap noted that, as previously mentioned by Coach Adrian Oh, there is the option of mobile-friendly websites, and that it was about the mobile experience, rather than the capital put into it. Social media channels like Facebook and Instagram are also recognised as new advertising channels as well.

In summary, Yap noted that a mobile-friendly site along with seamless checkout and reliable payment gateways remains the key to m-Commerce. Mobiles are a primary influence of driving a sale, and is the go-to tool for comparing prices and researching products.

Q&A: Will Mobile Marketplaces still be around years later?

Coach Adrian Oh responded that he personally thinks that marketplaces nowadays are a very capital-intensive game.

Talent is also needed, but unfortunately the supply cannot meet the demand.

The Malaysian market will eventually consolidate, as he does not see how the market will support so many marketplaces.

An attendee expressed that she was not quite keen on downloading the Shopee app due to the negative reviews it had on the Google Playstore.

Rep Edward Ling acknowledged that there will be negative comments from those who have a negative experience, and promised that the Shopee team will strive to look into those comments and improve, emphasising that improvment is an on-going process.

Q&A: What happens if my buyer doesn’t indicate that they have received their goods?

The attendee was concerned about whether the seller will receive the funds if the buyer does not respond to Shoppee’s prompts on whether the item has been received. Shopee uses an escrow system where it collects payment from the buyer and holds it in the Shopee system first, and only releases the funds to the buyer’s account when the buyer confirms that the item is received.

Ling responded that, if there remains no response from the buyer, Shopee processes the transaction anyway and the funds will be credited to the merchant’s account after the Shoppee Guarantee period ends.

Q&A: Can I Do Cross-Border Trade with Shopee?

Ling responded that the app is region locked. This means that the store in Malaysia is only available for Malaysians, as are the stores in other countries are for the market in those countries.

He then gave the example of going to Singapore and downloading Shopee’s app there, and being able to view the offerings from Singapore only.

Q&A: Shopee is 100% free and does not charge registration nor transaction fees. How does Shopee profit?

Ling responded that Shopee has many investors, who understand they are investing in an entry-level startup, and that the investor mindset is the long-term. Ling noted that Shopee is only a year old, and that they are still chasing critical mass, which is when they can start charging.

Q&A: How Is Shopee Different From Carousell?

Shopee initially entered the market as a C2C marketplace, similar to Carousell. But as they grew, generating more traffic and users, they started to get more interest from businesses, and have today evolved to a combination of C2C and B2C.

Q&A: What kind of traffic does Shopee see, and what is the buyer behaviour like?

Ling responded that Shoppe ranks amongst the top three players in the m-commerce market, with traffic in the hundreds of thousands, and growth of about 20% each month. Regarding buyer behaviour, Shopee is dominated by no one particular buyer demographic, as buyer behaviour differs between categories.

Ling shared that Shopee shares data collected on consumer behaviour and shares it with their sellers.

Q&A: How does Shoppr make money?

Yap responded that Shoppr draws a commission from each sale generated on the platform, and are looking to selling data on search terms, tags, and keywords to sellers further down the line.

iJual.my is a convenient and hassle-free platform for merchants intending to move towards e-commerce, targeting merchants whose sales process involves multiple conversations through social media such as FB Messenger, WhatsApp etc. iJual has no registration nor monthly fees. Merchants may register at www.ijual.my.